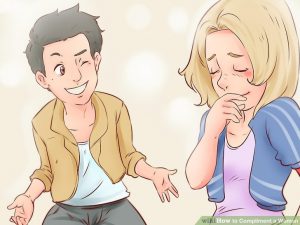 Complimenting a woman should be an easy task, but when nerves step in, it can often seem a lot harder than it should be. Thankfully, most women are happy just to know you’ve tried to give be sweet, but to make sure it doesn’t backfire completely, here are some tips to help you out:

1. You’re not a woman
Some men think that the way to a woman’s heart is to try to speak her language. While it may seem like a good idea to let a woman know you love the handbag she’s carrying and that you saw it on sale at Macy’s the other day – she’ll probably think you’re gay before she thinks of going to dinner with you. If you really do love the bag- tell her it’s great, but leave it at that.

2. Drop the physical
Remarks regarding a woman’s physical attributes are the most common praises she will receive, so if you want to be remembered, mention something else. If you’ve been chatting for a while, tell her she seems like a really interesting person, or you’ve never met anyone quite like her. Make sure you time this correctly, however. If all you’ve been talking about is the morning traffic, she’ll think you’re a bit of a weird-o. These lines are better saved for when she’s letting you know more about herself.

3. Save the cheese for pizza
Seriously – don’t use cheesy lines if you actually want to impress the girl. Lines like “I would tell you that you’re beautiful, but you probably hear that all the time.” *pause*awkward smile from the girl* “It’s true, by the way” make you seem like the type of guy that hands out insincere remarks to any pretty girl who walks by. If you’re going to compliment, make it truthful and sincere.

4. Make it truthful and sincere
In other words, try making the praise as direct as possible. The more you butter itup, as in tip #3, the more likely you are to seem insincere. If you love a girl’s style, try saying “I really love your style” or if you think she has beautiful hair, try saying “I think you have beautiful hair”. If you look her in the eyes and tell her a simple fact, she’s more likely to believe you’re being sincere – and more likely to respond positively towards you.

5. Stop when the going is good
If you’ve successfully dropped one or two good remarks that seem to have been well received – stop there!! A few compliments make a girl feel admired while 10 of them make a girl feel like she’s about to have a stalker on her hands when she walks away. This is supposed to make her like you – not freak her out.