It is commonly known that penis size influences how much power a man feels, his sense of masculinity, and how confidence he is about his sexuality.

Yet, there haven’t been many research studies that have focused on the subject. But one recent study surveyed more than 51,000 heterosexual men and women on the perception of penis size. This study, published in the Psychology of Men and Masculinity journal was conducted by researchers at the University of California, Los Angeles (UCLA) and California State, Los Angeles. The research team examined the relationship between perceived penis size and body image among other variables.

The concern about the size of one’s penis begins in earnest when boys begin comparing themselves to other males standing to their left or right at urinals. Males don’t always realize that the size of a flaccid penis may not be proportionate to the size of the same penis erect. So, two males who are 3.5 inches when not erect won’t necessarily be the same size when erect.

Why penis size shouldn’t be a concern

The brain is the biggest sex organ of all. So if a female perceives a man with a larger penis to be a better lover, she may perceive him to be, simply based on this belief. Actually, one study suggests that some women do in fact report more orgasm with a larger penis. http://www.dailymail.co.uk/femail/article-2231751/Sorry-boys-size-DOES-matter-Scientific-journal-confirms-mens-worst-bedroom-fear.html But anatomically a large penis is not required.

Refer back to the 2% of female participants who reportedly wished their partners were not as large. They were probably the women who were in pain. A penis longer than 6.5-7 inches is likely to hit repeatedly again the cervix during intercourse. Men may like that. There’s a certain amount of pride in “putting a hurting” on a woman with a big penis. While some women may find that pleasurable, most women just find it painful. This deep thrusting also puts pressure on the bladder and increases the likelihood of a urinary tract infection.

A man doesn’t need a large penis to satisfy a female. The G-spot is only about 3 inches inside of the vaginal canal. The stimulation can be maximized with the rear entry (doggie style) position. There is also great sensitivity at the entrance of the vaginal canal. So the thickness of the penis is more important in this way.

And for the significant number of women do not regularly experience orgasm during intercourse, a few fingers, tongue, or sex toys are all that’s needed to stimulate the magic button-the clitoris.

Use a dental dam 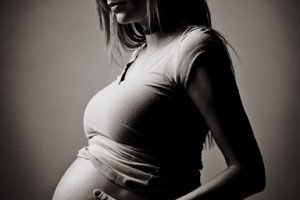 How to get pregnant