You thrust your tongue in and out.

The movements are rhythmic and stabbing.

Simulating our love making during mating.

I ask again, do you want me?

I can tell that you do.

No words are necessary.

I was into my third week as a cocktail waitress at a thriving little bar in the West End of London. Great holiday job, just four more weeks of this and I’d be heading for the beaches of Marbella with my two best friends. Couldn’t wait.

I studied myself in the mirror. I like to make an effort when I work behind the bar, you never know who you’re going to meet, and it’s always good for business. The better you look, the better the tips.

I was wearing a tight pink string top which emphasised my tits and a short black ra-ra skirt that swished around my toned, tanned thighs every time I wobbled my ass down the aisles of tables and chairs to serve the drinks. A pair of black stilettos completed the look; I was aware from the stares that they made my legs look good.

The bar was packed that night but the mood was good and the drinks were flowing fast. As I busied myself pulling pints for a new throng of customers, I could detect close attention being paid to my tits, which were pushed together and up, presenting, though I say it myself, a damn tasty sight.

There was one guy in particular who caught my eye, and he caught me looking. He was a tall and well muscled man with floppy blonde hair. When I finished pouring pints I made my way over to him, careful to pronounce my walk, you know, hips swaying, tits bobbing.

‘Would you like anything sir?’ I asked coyly, looking up at him from beneath my lashes.

I’d like you’’ he said, staring me straight in the face. I felt myself blushing and needed to find an excuse not to look so shocked. I bent down to open a small fridge behind the bar, knowing full well he’d get a glimpse of my ass, and the little white panties that I was wearing.

I placed a large bottle of ice cold Grolsch on the bar. “Grolsch?” I said with a smile.

I had never encountered such authority, and such eyes, burning into me with a look that brooked no further argument or delay.

I yelled to the manager I was going to take a break and swung my legs over the bar, treating him to a quick flash of white thong.

I didn’t want to make it look so painfully obvious that I was going to take a break with him, so I told him to hang back for a minute or two. “Third door down that corridor there’s a small recreation room for the staff,” I said. “Be there in two minutes.”

I had barely walked into the room when the door opened behind me “Nice room” he said, clearly unimpressed with the four white plastic chairs, a wooden table and a portable TV tucked away in the corner.

“Well we could always go back to the bar” I said, making for the door.

As if in answer, he grabbed me and his hands started to roam over my tits, my waist, up my skirt and onto my ass. I could feel his cock against my thigh, as I sought his for mouth for a passionate kiss. He broke off kissing and wedged one of the plastic chairs hard up against the door handle.

“Privacy” he said. Then he walked up to me, pulled up my pink top and started sucking on my big round tits. I started to moan and wound my fingers in his hair, stroking the nape of his neck.

Not to be outdone I undid his shirt to reveal his muscular chest. I trailed my fingers down to his pants and unzipped him. His big cock tumbled out. “No underwear I see” I said, getting to grips with his large glistening cock.

He held my head against the head of his cock and I obeyed his unspoken command to start sucking. He moaned and forced his cock into my mouth. I took him in as far as I could, tasting his salty fat sausage and enjoying the sound of his moans.

Suddenly he lifted my head, and then in one movement swept me up in his arms and pushed his cock into my pussy without warning. We stayed like that for several minutes, using just the strength of his arms to pump me up and down. Then he pushed me up against the wall and continued, our breathing wild and rapid, sweat rolling down his chest as he continued to pump away.

But he wasn’t done with me yet. He scooped up one of the white plastic chairs and turned it round, forcing me to kneel on it. Then he went behind me and started fucking me from behind, his balls slapping hard against my bouncing ass cheeks. I don’t know how sound proofed that crappy recreation room was, but I was making a lot of noise. Then he pulled out and with a roar his load came crashing over my pink top and even in my hair as I knelt there weak and gurgling with pleasure. He walked round to the front of the chair and I sucked him some more, watching his reactions as I played my tongue around the head of his cock. Sated, he zipped himself up and smiled at me.

“I co-own this place” he said casually.

I blushed from head to toe. My hand instinctively went to my mouth. “Oh my God, you’re kidding! What did you say your name was?”

He opened the door, turned to me and said, “I didn’t.”

And with that he was gone. 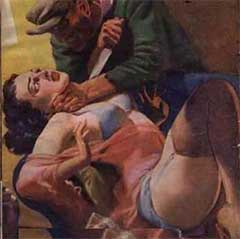 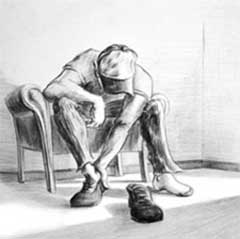